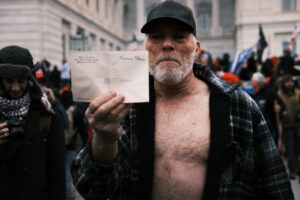 You may not know Richard Barnett’s name, however I saw his picture. A Capitol rebel was on January 6 and broke into Nancy Pelosi’s office badly, posing for photos sitting at her desk – wearing an amazing pistol – and with the spokesperson’s mail. He has since been charged with a number of federal crimes, including aiding and abetting, disorderly conduct on the Capitol, demonstrating or demonstrating on the Capitol, and theft of government property.

Barnett pleaded not guilty to the charges against him, and was taken into custody without bail – a fact that he appears to be very upset about. Barnett appeared on a video call from prison in front of US District Court Judge Christopher R. Cooper, and pitched a fit because he was in custody. When the judge scheduled May 4 for the next hearing in the Barnett case, he could be heard To complain:

“They pull this off!” Shouted. “They leave everyone out!”

Then a break was called in to calm Barnett. When the hearing resumed, Judge Cooper noticed that he would consider a new motion for release, you know, if Barnett’s attorneys provide one.

Catherine Rubino is Senior Editor, Above the Law, and host of The Jabot Podcast. AtL Tips are the best, so please get in touch. Feel free to email to her For any advice, questions or comments and follow it on Twitter (Embed a Tweet).