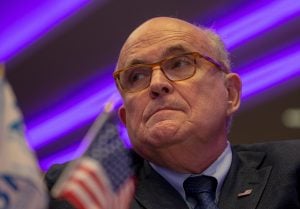 With him Back in federal court this week, observers indicated that Rudy Giuliani has not appeared in federal court since 1992. According to PACER, what law firm did Rudy work for when he represented another entity in court?

Hint: The company has shortened its name since then, but the first two names remain.

See the answer on the next page.