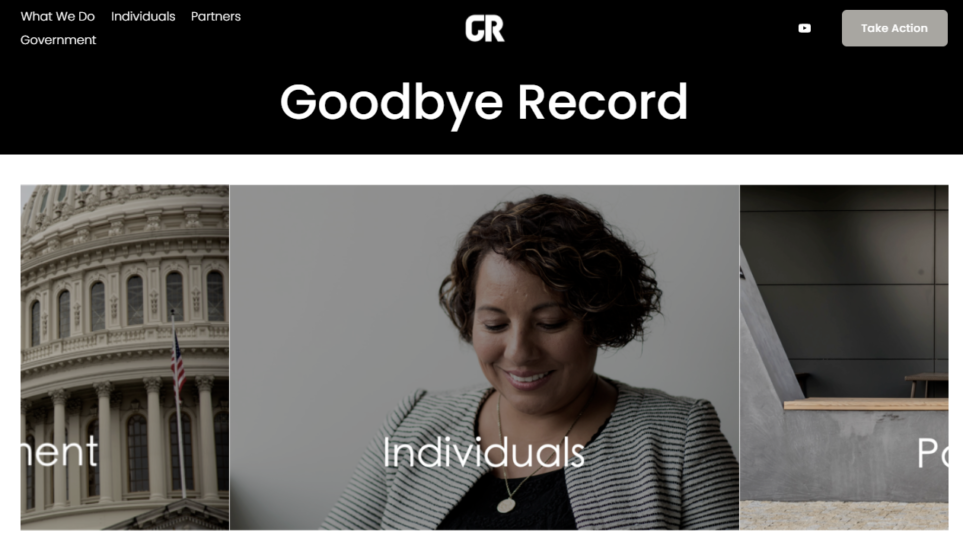 Eight students at LawX’s Legal Design Lab BYU Law They developed an online resource called Record goodbye, Is designed to address flaws in the criminal record write-off process in Utah and possibly other countries as well.

I have written Number of times About LawX, a lab software It was launched in 2017 Law students use design thinking to analyze and address issues critical to accessing justice. In each lab throughout the semester, students tackle a different issue.

Previous LawX projects led to the development of the Solo, To help consumers respond to debt-collection lawsuits, which they were designated Private company, And the Hello the owner, Designed to help tenants communicate more effectively with landlords about issues that can lead to eviction.

In an interview yesterday, Mary ColbethOne of three associate professors who led the lab this semester, W. Tanner ShinwarkA 2021 graduate in it (who will now join Clifford Chance in her New York office), tells me that they have chosen deletion as their subject this year in part because of BYU Law’s past experience introducing a Pro Bono Expungement clinic.

Students initially planned to develop an app to help individuals apply for deletion. But as they researched the problem as part of the Design Thinking process, they found that the bigger problem is that deletions often fail to bring about the fresh start they were designed to deliver.

They found that system flaws and outdated online information often make it difficult to completely erase a criminal past, even after getting deleted, resulting in online remnants of background checks and often preventing individuals from obtaining housing or employment.

Looking at these results, students abandoned the idea of ​​the app and instead built an online resource addressing three main categories that could play a role in helping to secure second chances for those whose records were removed: employers, individuals, and governments.

“The idea is really to provide an electronic problem kit,” said Shinwark.

The employer component, which Goodbye Record calls the Partner component, is directed at employers and invites them to take a Fair Shot pledge to implement and support a series of actions to help reduce instances of misreporting, thereby giving qualified individuals a fair chance of being hired. Companies that take a pledge may display their company logo on the Goodbye Record website to let potential employees know that they are supporting individuals seeking a fresh start.

The single component informs people how to navigate roadblocks after deletion, including how to report violations to the Equal Employment Opportunity Commission and the Department of Housing and Urban Development, and how to contact the clearinghouse to help background checks for companies to remove deleted records from commercial databases.

Currently in Utah, petitioners have a responsibility to reach out to all the different agencies to make sure their records are erased. This cannot be done electronically and often requires individuals to spend time away from their work or look for work.

The government component addresses potential legislative and administrative solutions, including ways in which states and courts can improve the final step of deletion, limit access points, and require commercial data subscribers to update their databases.

One solution that students developed to address the government component was to improve contract language between governments and data subscribers. Students found that courts and government agencies have contracts with public records companies to regularly file criminal statements, and that these companies often resell their data even after that. But when deletions are granted, companies don’t always update their data, so criminal records still appear in online databases and in criminal record checks.

Students developed contract language for governments to use with these companies that do two things. First, it requires companies to update their databases regularly to reflect deletions. Second, it provides an audit procedure to ensure companies’ compliance.

Students are also lobbying states to adopt legislation to shift the burden of distributing removal orders from individuals who have been granted expulsion to agencies that keep those records.

Plans to go to patriotism

Earlier this month, LawX students presented their findings to Utah Supreme Court and the Utah Courts Administration office. As a result, the administrative office committed to amending the Aggregate Data Publication Agreement to incorporate students’ language.

It is also considering supporting legislation that would shift the burden of distributing delisting orders from individual petitioners to the Utah Office of Criminal Identification, which would be mandated to demand electronically that other state agencies remove the deleted information from their records.

While students’ efforts have so far focused on Utah, they have engineered Goodbye Record to be a national resource and plan to move their lobbying efforts to other states now that this is launched.

In addition to Kulbeth, who is also Director of Operations and General Counsel at SixFifty, the lab was also led by associate professors. Eric Vogeler, General Counsel and CCO at Genesis Block, and Justin Whitaker, Director of Invisible Co. , Who shared his experience in product development, business and design thinking.

“I’m really excited about this project,” said Himonas in a statement provided by LawX. “It is a powerful example of design thinking and implementation. Instead of trying to replicate other efforts, LawX studied the space and sought to understand the true bottlenecks to create some truly innovative approaches to the surveying process.”

Given that Schenewark is now heading to start his career as a partner in the transaction group at Clifford Chance, I asked him if he believed his LawX work on a criminal justice problem had contributed anything to his future career.

As it turns out, this was his summer assistant position at Clifford Chance, a company known for innovation and where he had the opportunity to work with a budding legal automation company. JosephThis sparked his appetite for legal technology and led him to sign up for LawX.

He said working through LawX’s design thinking process showed him the complexity of the legal issues and how many moving parts he needed to manage to address them.

“When you are able to come up with an elegant and effective solution, I think that was a tremendous result,” he said. “I hope I can move forward in my career.”

Kulbeth pointed out another thing students are learning. She said BYU seeks to inculcate in students a sense of not only justice, but also compassion, and delisting is one aspect of the criminal justice system that really involves mercy.

The person granted the write-off has spent their time, completed any probation period, paid any fines, and now wants a chance to live their life and be a part of their community.

“To me, that’s the meaning behind the project,” Kulbeth said. “We cannot have a perfect justice system. We know we don’t have one. So we must have a way to integrate compassion into the system.”